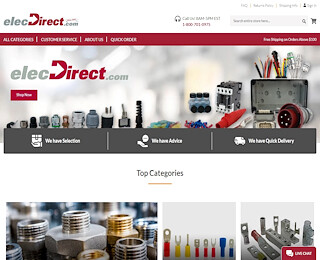 Switching large electrical power loads such as motors, lighting, and heaters on and off is a common automation requirement. The device for doing so is called a contactor. Contactors are built with some specialized features for handling high power loads. In this post, we’ll covers why contactors are used, how they work, and where they are installed.

Why Are Contactors Used?

Contactors are used for high power applications. They allow a lower current and voltage to switch a much higher power circuit. Contactors carry much higher contact ratings up to many hundreds of amps and rated for operation at 600Vac. A common category of electrical contactors includes devices designed to meet the International Electrotechnical Commission (IEC) standards. IEC contactors feature a modular and compact configuration, with many electrical sizes available. End-users must ensure that each component they choose meet the application needs, as well as comply with all applicable codes and regulations in service, and carry other required electrical ratings like UL.

How Do Contactors Work?

Contactors are built with features to suppress and control the arc produced when preventing heavy motor currents. When current moves through the electromagnet, it excites a magnetic field, which draws the moving core of the contactor. Initially, the electromagnet coil attracts more current continuously until its inductance rises when the metal core penetrates the coil. The moving core propels with contact. When the current is removed, the coil is de-energized and opens the circuit. The contacts of the contactor are known for their rapid, open, and close action.

What Is The Life Expectancy Of A Contactor?

The life expectancy of a contactor is one of the biggest issues of a user. The life of the contactor will decrease when being opened and closed more frequently. The opening and closing of the contacts produce an electric arc, which generates continuous heat that can damage the contact surface. Furthermore, the electrical arcs cause burning and pitting marks, which eventually blacken the contacts. When the contacts get corroded and worn out to some extent, then it is necessary to replace them.

Contactors are usually sized, selected, and ordered by their intended full load amperage. However, you can oversize a contactor but never try to undersize it. Contactors are typically wired and mounted into place. Bigger contactors are quite heavy and must be bolted to an enclosed back panel. Small contactors use DIN rail mounting, and some use their own specific mounting plates, which can be panel-mounted. Wired contactors can either land into the compression lugs, or installed onto the wires so they can be landed on bolted the connections. Mounted and wired contactors must be unbolted and unwired when replaced.

Where Can You Get A Contactor?

At elecDirect, we have IEC power electric contactors in stock and ready for immediate purchase. Contact us today if you are looking for IEC power contactors that are suitable for a variety of applications like motor control, ventilating and heating, air conditioning, lifting equipment, pumping, lighting, and process power.